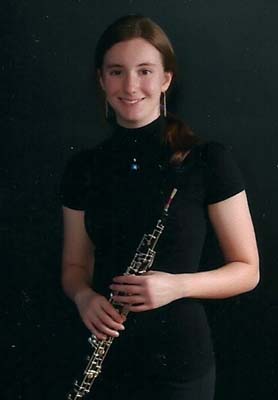 Abby Lewis-Lakin is a sophomore at the University of Michigan pursuing a double major in Oboe Performance and Music Education.  She has been studying oboe privately since the age of eleven.  Her teachers include Caitlin McKeighan, Kristin Hall, and Julia Levin.  She is currently studying with Dr. Nancy Ambrose King.  She has participated in many masterclasses, recitals, and concerts at the University of Michigan.  A member of the Concert Band, she has also performed in chamber ensembles throughout her high school and college career including an oboe trio, woodwind quintets, duets, dectets, and other large chamber ensembles.  In high school, she participated in many youth and honors orchestras including the Michigan Youth Symphony Orchestra, and the Michigan Youth Arts Festival Orchestra.  In October 2009, she appeared as the guest principal oboist in the Livingston Symphony Orchestra.  She also, in 2010, was a guest oboist for the Detroit Medical Orchestra.  In the summer of 2010, she was a camp counselor at Judson Collins Center in Onsted, Michigan and enjoyed every minute of it.

In the future Abby hopes to be a general music teacher for elementary aged children.