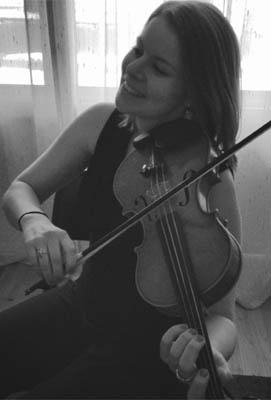 Alison began playing violin at the age of six, and has studied with Geri Arnold and Professor I-Fu Wang of Michigan State University, where she received her bachelor’s degree in Music Education.  She has been teaching private lessons ranging from beginners to high school students since 2005.  She has performed in such ensembles as the Michigan Youth Symphony Orchestra, the MSBOA All-State Orchestra, and both the Michigan State University Philharmonic and Symphony Orchestras.  She acted as a long-term substitute teacher for the Lansing Catholic High School orchestra class in the Fall of 2012, and was also a Suzuki Teaching Assistant at the MSU Community Music School from 2010-2011.

Alison has performed with the Silver Strings Trio and Four Seasons Quartet as a wedding musician, and as a guest performer with the Chelsea Chamber Players and the Dexter Community Orchestra.  She is also the conductor of the newly formed Livingston Youth Orchestra, which will premiere its first season in the Fall of 2015.  Alison is in her third year as an orchestra teacher at Dexter Community Schools where she works with fifth through twelfth grade students.