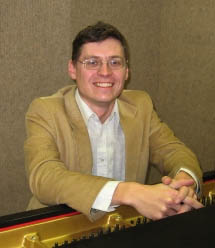 Ilya Blinov, from Nizhny Novgorod, Russia, began his musical studies at the age of six.  A graduate of the Music College of Nizhny Novgorod and the Nizhny Novgorod State Conservatoire, he was the recipient of a special prize at the 2003 International Piano Competition in Tolyatti, Russia.  In addition, he presented recitals in Russia in Nizhny Novgorod, Yaroslavl, Penza, Kostroma, and St Petersburg, and in Paris at the Yamaha Center.

As a winner of the 39th Annual Competition in Music Performance (Bowling Green, Ohio), Ilya performed Prokofiev's Second Piano Concerto with the Bowling Green Philharmonia.  In March 2006, he gave a recital on Live From FM 91 (WGTE Public Radio).  In September 2006, he performed an all-Shostakovich recital dedicated to the composer's centennial.  Two months later, he appeared at the Shostakovich Festival in Rome and Venice, Italy.

In 2008, Ilya won the Concerto Competition at the University of Michigan and took part in The Gilmore Keyboard Festival in Kalamazoo.  Most recently, Ilya has performed Stravinsky's Rite of Spring at the Power Center (four hand version, with the U of M faculty Christian Matjias), Mozart's Concerto K467 with the Jackson Symphony (broadcasted on 90.5 WKAR), and Shostakovich's 24 Preludes at Cincinnati College-Conservatory of Music.  Ilya holds a master’s degree from Bowling Green State and is pursuing a Doctor of Musical Arts degree in piano performance from the University of Michigan, where he studies with Arthur Greene.