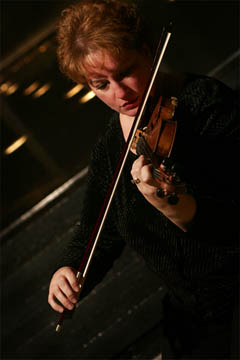 Janet Sullins received her Bachelor of Music in Violin Performance from Western Michigan University where she studied with David Updegraff and Renata Knific.  While at Western, Janet was concertmaster of the University Symphony Orchestra and 1st violinist in the Honors String Quartet.  She began performing in the Michigan Opera Theatre Orchestra in 1988 and the Lake George Opera Festival in New York in 1990.  In 1995 and 1996, she was on the national tour of Andrew Lloyd Webber’s “Music of the Night”.

A resident of Hamburg Township since 1999, Janet continues to perform with the Michigan Opera Theatre and in major venues throughout the state including the Detroit Opera House, Palace of Auburn Hills, Meadowbrook Music Festival, DTE Energy Music Theatre, and Van Andel Arena.  She makes her debut with the Chelsea Chamber Players in March of 2002.

Janet’s life long dream of having her own music studio became a reality in 2001 with the help of her husband.  They live in Hamburg Township with their two children.