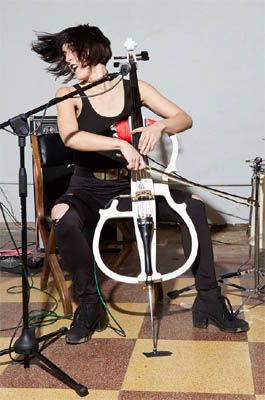 Kate Wakefield is a touring musician based out of Cincinnati, Ohio.  She has been writing and performing experimental rock and indie music on her cello since 2014. She writes and performs with a heavy rock band called Lung, and plays and records solo music under her name as well.

Kate formed the band Lung with her friend and drummer Daisy Caplan in 2016.  Since then, they have played over 300 shows across the United States and Canada.  The duo is set to release their second record All the King’s Horses on September 7th, and will be on the road for the remainder of the year promoting the album.  As a solo artist, Wakefield has a collection of 2 full length records (Unkind, Eyes in Walls are Louder), as numerous EP’s, and is set to record another solo album in winter of 2019.

Wakefield grew up in Ann Arbor Michigan and enjoyed playing the cello from a young age.  She received a bachelors degree in vocal performance from the University of Michigan in 2010 and holds a masters degree in operatic performance from Cincinnati’s Conservatory of Music.  In 2013, she developed a vocal disorder that put her operatic career on hold.  She picked up her cello, and began writing music to help her through the experience.  When her voice came back, she had no desire to go back to the world of opera and continued writing and playing her own compositions in music bars and clubs around the country.

Follow Kate’s tour dates and music with Lung at www.lungtheband.com and listen to her solo work at katewakefield.bandcamp.com.