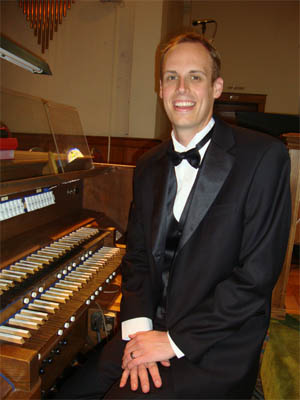 Kyle Webber has been Director of Music Ministries and Organist at First United Methodist Church in Chelsea, Michigan since June 2007.  There, he leads a comprehensive music ministry of musical groups from Kindergarten – Adult as well as a free community concert series, which attracts performers from across the United States.

Kyle was born and raised in northwest Indiana and graduated from Valparaiso University in Valparaiso, Indiana where he earned his Bachelor of Music Education degree in May of 2004.

Before coming to First United Methodist Church, Kyle taught Middle School Band and Orchestra in the Sarasota County, FL public schools and served as Minister of Music at Lakeside Lutheran Church in Venice, FL from 2005-2007.  He also has served numerous churches as organist and/or director of music since he was 13 years old including organist at St. John’s United Church of Christ in Michigan City, Indiana from 2002-2004.