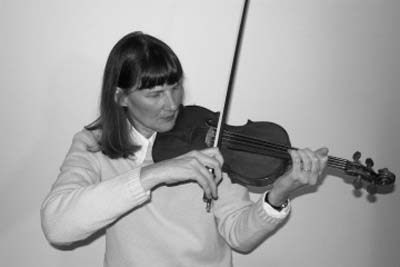 Paula began violin studies at the age of five with her father, the renowned teacher and conductor Vilem Sokol.  After attending the University of Washington on a Breecheman Scholarship, Paula graduated with honors from Indiana University where she studied with the legendary Josef Gingold.  Stanislaw Skrowaczewski invited her to join the Minnesota Orchestra, where she recorded the complete works of Ravel and Bartok for Vox Records.  She performed as violinist with the Vancouver Symphony, and as associate concertmaster of the Kalamazoo Symphony.

Paula won the Saunderson Award at the Coleman Chamber Music Competition in Los Angeles, CA, and was 1st Violin of the Leclair String Quartet, which toured and recorded for the Canadian Broadcasting Corporation.  Chamber music coaches and teachers included Jaime Loredo, Ruggiero Ricci, Gyorgy Sebok, Michael Kuttner of the Hungarian String Quartet, Robert Koff of the Julliard Quartet, and Bernard Goldschmidt of the Cleveland Orchestra.

Paula has performed with the West Point Grey Chamber Players, the Vancouver Chamber Players, the Bach Festival at Mt Angel, OR, the Michigan Chamber Players, and the Chelsea Chamber Players.  She has been on the faculties of the Meadowmount School of Music in New York, the Marrowstone Music Festival, McPhail College, the New Brunswick Music Festival, and the Rocky Mountain Music Festival in Steamboat Springs, CO.  Solo appearances include the Seattle Youth Symphony, The Seattle Symphony, the Minnesota Orchestra under the direction of Leonard Slatkin, the New Brunswick Chamber Orchestra, and the Flint Symphony where she received a glowing review for performance of John Williams' masterful violin solo "Remembrances" from Stephen Speilberg’s Schindler’s List.

Paula's lifelong commitment to teaching began at the age of ten.  She continues to mentor her students in the exploration of the violin and viola repertoire and the technical challenges that each of these instruments present.

Currently Paula performs as Concertmaster of the Dexter Community Orchestra, and plays several concerts a year with the Chelsea Chamber Players.