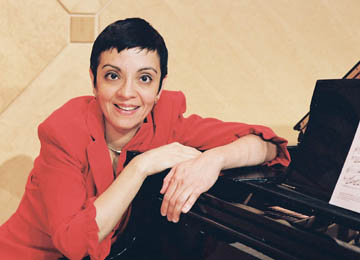 Rubia Santos has recently joined the School of Music at Central Michigan University as the director of the accompanying program-beginning fall 2003.  Ms  Santos' highly praised collaborative work and artistic talent have been recognized through notable reviews and awards including the Patricia Keating Excellence in Piano Accompanying Award, the Outstanding Graduate Performer Award from Arizona State University, the Alice Prize for the best performance of Brazilian Chamber Music, and most recently the Kiechhefer Arts Research Award, granted by the Herberger College of Fine Arts at Arizona State University.  Santos performs frequently in Europe, South America, and the United States in collaboration with many leading artists, among them: sopranos Christiane Oelze and Laura de Souza, oboist Alex Klein, flutist Jeanne Baxtresser, hornist Roberto Miticzuk, violinists Betina Stegmann and Miha Pogacnik, the String Quartet of Sao Paulo, and members of both the Los Angeles and the Israel Philharmonic Orchestras.

As one of Brazil's most sought-after pianists, Santos has premiered many Brazilian solo works dedicated to her, and recorded vocal and chamber music by contemporary Brazilian composers.  In the United States, Ms  Santos can be heard on "A Brazilian Collection" in collaboration with Brazilian trumpeter Luis Engelke.  In 2001, Santos joined the KRUSTA Ensemble in residency at Arizona State University, a collaborative ensemble for new music and dance.  Invitations as a guest artist include venues such as the International Trumpet Guild, MTNA National Convention, and Brazilian Arts Festival.  Brazilian-American Cultural Institute, International Music Festival of Campos do Jordao in Brazil, and the American Institute of Musical Studies, in Austria, where she is on the summer faculty.  Ms  Santos has taught at the Musikhochschule in Cologne, Germany, as well as Arizona State University.  Santos' doctoral research involves the untouched subject of piano trios written by twentieth-century Brazilian composers with whom she is associated.  Her dedication to the research and performance of Brazilian music has strongly influenced many other scholarly works in the United States.  Rubia Santos artistic growth began in Brazil with the traditional pianism of Magdalena Tagliaferro, who was a student of Alfred Cortot, and Lina Pires de Campos, followed by studies with Gunter Ludwig in Germany, and Eckart Sellheim in the US.

Santos was mentored by the acclaimed Amadeus Quartet and violinist Chaim Taub of theTel Aviv Quartet.  She holds an artist diploma from the Musikhochschule in Cologne and a master of music degree in piano accompanying from Arizona State University.