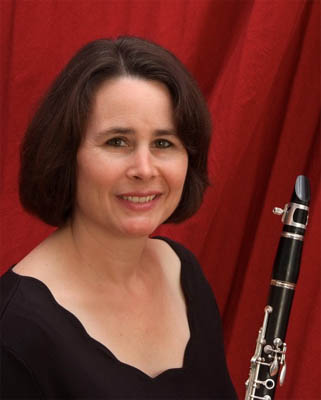 An active performer, Ms Jackson was a founding member of the Lakeview Chamber Ensemble and has performed with the Cut-Time Players Workshop, the Toledo Wind Quintet and the Camerata Woodwind Quintet.  She recently was a featured soloist at the Lexington (Michigan) Bach Festival and has been a featured performer at the International Festival "Week of the Clarinet" in Mexico City, Mexico.  She was a prizewinner at the Kurpinski Competition in Warsaw, Poland.

Ms Jackson currently is a Lecturer at Eastern Michigan University and maintains a private clarinet studio.  She has been on the faculty of the University of Toledo and served as Interim Clarinet Professor for the University of Michigan, Eastern Michigan University and Western Illinois University.  During the summer she teaches clarinet and chamber music at the prestigious Interlochen Center for the Arts, where she regularly performs.  In addition, she is the Director of the Wind Division at Interlochenĺs Adult Chamber Music camp.

Ms Jackson received an M.M.  from the New England Conservatory and a B.M.  from the University of Illinois.  Her teachers include Harold Wright, Richard Waller, John Bruce Yeh, and George Townsend.  She can be heard with the Orquesta Sinfonica del Estado de Mexico on the ASV label.