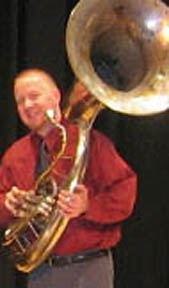 Mr Pemberton graduated from the Interlochen Arts Academy as a Young Artist Winner (Interlochen’s highest honor).  He studied music performance at the University of Michigan, where he was awarded a full tuition merit-based scholarship for three years.  Mr Pemberton’s major teachers include Abe Torchinsky (Philadelphia Orchestra) and Wesley Jacobs (Detroit Symphony).  He has performed in master classes with Warren Deck (New York Philharmonic) and Paul Kryzwicki (Philadelphia Orchestra).  Mr Pemberton has performed as a freelance tubist in orchestras and chamber ensembles throughout Michigan.

William Pemberton is Executive Director and tubist of the River Raisin Ragtime Revue, an ensemble he founded to combine his professional music performance ability and his love of American history.  He has been a member of the Working Class Tuba Quartet since it was formed in 1986.